A LIFE IN SONG 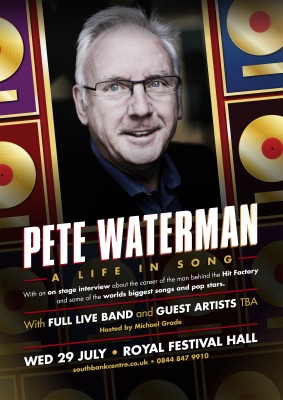 As one of the most prolific music moguls of a generation, the original hit man behind more than 100 Top 40 UK Hits and 40 Million records, Pete Waterman, will now take center stage as his career is celebrated through the Life In Song Series at London’s Royal Festival Hall on 29th July 2015.

Very special guest artists will take to the stage to pay tribute to the music and the man himself; expect new interpretations and a few surprises along the way! The artists will be announced in due course.

Following such luminaries as Sir Tim Rice and Don Black, the latest in the series will also see veteran TV figure, Michael Grade, host and interview Pete live on stage throughout the show to provide a never before seen insight into his legendary and fascinating career.

Grade will look into his career and the huge influence on the music industry he has had and whose Hit Factory defined the sound of a generation. You’ll hear anecdotes about his career, careers he has been involved in such as Kylie Minogue, Donna Summer, Jason Donovan, Bananarama, Steps and many more.

“Little did I think when I visited London as a child from Coventry that one day I would appear at the Festival Hall – not bad for a boy who left school unable to read or write!” – Pete Waterman