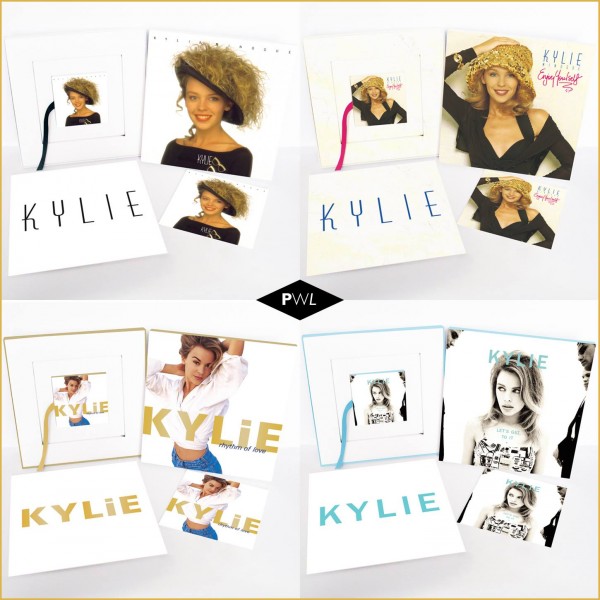 It is with sincere regret that we have to announce a delay to the release date of the Kylie Minogue reissues for ‘Kylie’, ‘Enjoy Yourself’, ‘Rhythm Of Love’ and ‘Let’s Get To It’.

Shortly after making the initial release date announcement, we managed to gain access to some additional materials, in particular some video archive, that we previously thought would be unobtainable. We had hoped to include this new material and still be able to make the original release date – but some of the video needs restoration work to bring it to the standard we want. Our team have been doing everything they can to complete this task in time, and we are sure the final results will be worth the wait.

We want to make these releases something special, and we share your disappointment at this delay – as always your continued support is truly appreciated. Full details of the updated track lists can be found on all product pages on this site:

By popular demand, PWL/Cherry Red are delighted to reissue the first four albums by the undisputed princess of pop – Kylie Minogue! Available in October, digitally remastered from the original studio tapes will be ‘Kylie’ (1988), ‘Enjoy Yourself’ (89), ‘Rhythm of Love’ (90) & ‘Let’s Get To It’ (91)

Marking the first time these classic albums have been back in print since their original release, expanded versions of each album will be available in three formats: Special edition (with unique picture CD artwork and a 24-page booklet containing full lyrics, new sleeve notes and classic images), a Deluxe Edition and a Collector’s Edition.

‘KYLIE’ was originally released in July 1988 and went a record-breaking six times platinum in the UK – then the biggest-selling debut album ever. Produced by the legendary Stock Aitken Waterman team, the album features the classic hits “I Should Be So Lucky” (#1), “Got To Be Certain” (#2), “The Loco-Motion” (#2, US #3) and “Je Ne Sais Pas Pourquoi” (#2), plus the Japanese #1 “Turn It Into Love” and the US Top 40 hit “It’s No Secret”. The special edition includes the original 1987 version of “Locomotion” (Kylie’s Australian debut single prior to signing with PWL), “Made In Heaven”, recorded as the double A-side for “Je Ne Sais Pas Pourquoi”, plus six essential 12″ mixes.

‘ENJOY YOURSELF’ was originally released in October 1989 and found Kylie consolidating the phenomenal international success of her partnership with PWL and the Stock Aitken Waterman team. Going four times platinum, the album gave Kylie a second chart-topping LP and continued her uninterrupted run of hits with “Hand On Your Heart” (#1), “Wouldn’t Change A Thing” (#2), “Never Too Late” (#4) and “Tears On My Pillow” (#1). The special edition boasts nine bonus tracks, including the unforgettable #1 duet with Jason Donovan, “Especially For You”, which originally appeared only on the US edition of the album, plus sought-after B-sides and the essential 12″ mixes of all the singles.

‘RHYTHM OF LOVE’ was originally released in November 1990 and has long been seen as marking Kylie’s coming of age as an artist – both visually and musically. As well as songwriting herself for the first time with US collaborators such as Stephen Bray and Michael Jay, Kylie recorded seven classic tracks at PWL with Stock Aitken Waterman, including a legendary run of signature singles: “Better The Devil You Know” (#2), “Step Back In Time” (#4), “What Do I Have To Do?” (#6) and “Shocked” (#6). The Special Edition featuresfive bonus tracks – the essential 12″ mixes of all four singles plus the original March 1990 mix of the fan favourite “Things Can Only Get Better”.

‘LET’S GET TO IT’ was Kylie’s final album for PWL, originally released in October 1991 to rave reviews. Produced by Stock & Waterman, it found Kylie exploring the diverse grooves of the early 90s, from New Jack Swing and R&B to house and techno. It features the hits “Word Is Out” (#16), “Give Me Just A Little More Time” (#2), the classic “Finer Feelings” (#11), and the self-penned duet with Keith Washington, “If You Were With Me Now” (#4). The Special edition includes eight bonus tracks: “Keep On Pumpin’ It”, Kylie’s classic underground club collaboration with Visionmasters & Tony King, plus B-sides and essential 12″ mixes.

“Kylie celebrated 25 years in music a couple of years back, so I went along to see her Anti Tour and to say hello. It was a fantastic night, and hearing her do some of these songs then, tracks she probably hadn’t sung since she was signed to PWL, was magical. It was obvious just how special they are – for Kylie herself, for all of us worked on them, and for the fans in particular, and more so with time. They’ve become genuine classics.

Back then, we were making music for the moment, but it’s stood the test of time. That’s something special. And that’s why we’re celebrating with these very special releases.

I now know what history means”